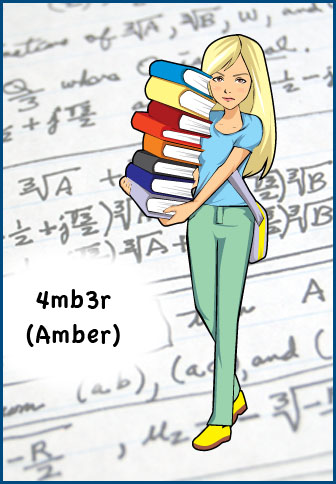 Suraiya Amber White started going by her middle name in fourth grade to fit in, when her family moved to Wisconsin. Amber’s mother is from Lebanon and wears a hijab, but she has always allowed Amber to decide for herself in religious matters. Academics and extracurriculars are another story. Both of Amber’s parents – but especially her mother – push her to excel in all subjects and to join as many clubs as possible so she will be guaranteed to succeed in life. At times she feels like a break dancer about to fall on her face. Still, she discovered her love for algebra early on. She loves the sense of balance and control she gets from moving numbers and letters around on either side of an equals sign.

In freshman year Amber’s desire to fit in led her to dye her hair and join The Four Blondes, a “Mean Girls”-style popular clique. At last, she was “one of the gang.” But that acceptance unraveled when the other girls expelled her. They claimed she had worn pants too many days in a row over summer vacation! Amber has since retreated socially, and has even deigned to join the Math Team. But sometimes she reverts to the snarkiness she picked up among the Blondes. There’s a sharp tongue to go along with that sharp mind.

Amber isn’t sure where she belongs in Waukesha High and in life and is trying to find a place for herself. If the Math Team can come together to make it to The National Math Challenge, she hopes she’ll prove to her parents that she can achieve what they expect of her. Then maybe she can figure out who she wants to be.

Does Amber crash under pressure or does her ambition propel her to greatness?  And how does she reconcile her heritage with the other members of the math team?  Find out in NUMBERS N3RDS!